For qPCR & Other Applications

Superior qPCR dye
Brighter and less inhibitory than SYBR® Green
Environmentally safe
Non-mutagenic, non-cytotoxic and safe to aquatic life for safe handling and easy disposal down the drain
Melt curve analysis
The only dye that allows you to perform qPCR and high-resolution melt (HRM) analysis in the same reaction
digital PCR
EvaGreen® Dye is compatible with a number of digital PCR platforms
in-gel DNA visualization
EvaGreen® PCR products can be run on a DNA gel and visualized without the need for another gel stain
great in master mixes
EvaGreen® Dye is used in all of Biotium's dye-based qPCR master mixes, like the superior Forget-Me-Not™ Master Mixes

EvaGreen® Dye is a next-generation DNA-binding dye that is ideal for quantitative real-time PCR (qPCR) and many other applications. Biotium scientists designed the dye by taking into consideration several essential dye properties relevant to PCR, including PCR inhibition, safety, stability and fluorescence spectra of the dye. The result of our efforts is a dye superior to SYBR® Green I and other commercial PCR or high-resolution melt curve (HRM) dyes.*

EvaGreen® Dye is used in all of Biotium’s dye-based qPCR master mixes, which combine superior brightness and sensitivity, with the ability to do sensitive melt curve analysis in the same reaction. In addition, EvaGreen® Dye is non-toxic, non-mutagenic, and not hazardous to aquatic life.

EvaGreen® Plus Dye is an improved alternative to Biotium’s original EvaGreen® Dye which retains the same essential benefits while providing a greater signal-to-noise ratio. The lower background and higher signal from EvaGreen® Plus provides further advantages for digital PCR and isothermal applications.

Visit the Forget-Me-Not™ EvaGreen® qPCR Master Mix technology page to learn more about the advantages of our qPCR reagents.

EvaGreen® DNA-binding dye is designed using a novel concept of DNA binding via “release-on-demand” mechanism (Fig. 1). The dye is constructed of two monomeric DNA-binding dyes linked by a flexible spacer. In the absence of DNA, the dimeric dye assumes a looped conformation that is inactive in DNA binding. When DNA is available, the looped conformation shifts via an equilibrium to a random conformation that is capable of binding to DNA to emit fluorescence.

This chemical equilibrium provides a unique mechanism to continuously supply the active form of the dye from the “reserve” (i.e., the dye in looped conformation), as more DNA is formed during a PCR process. Consequently, an EvaGreen® master mix can be formulated with relative high dye concentration to maximize fluorescence signal without PCR inhibition, making the mix suitable for both qPCR and HRM applications.*

A PCR dye emits fluorescence by forming a dye-DNA complex. The interaction with DNA inevitably leads to some PCR interference. PCR inhibition by the dye can be particularly serious at the early stage of PCR, where the dye-to-DNA ratio is high. On the other hand, a sufficient dye concentration is important for generating good signal. Thus, an optimal dye concentration must be used in order to attain reliable PCR performance.

For many current DNA-binding PCR dyes, such as SYBR® Green I, the optimal dye concentration can be quite low, which limits PCR signal and also makes the dyes unsuitable for high-resolution melt curve (HRM) analysis. Furthermore, a master mix with low SYBR® Green concentration may fail to detect multiple amplicons by melt peaks due to dye migration from small amplicons to large amplicons, giving the false result of a clean single amplicon for a PCR that may, in fact, produce several products. 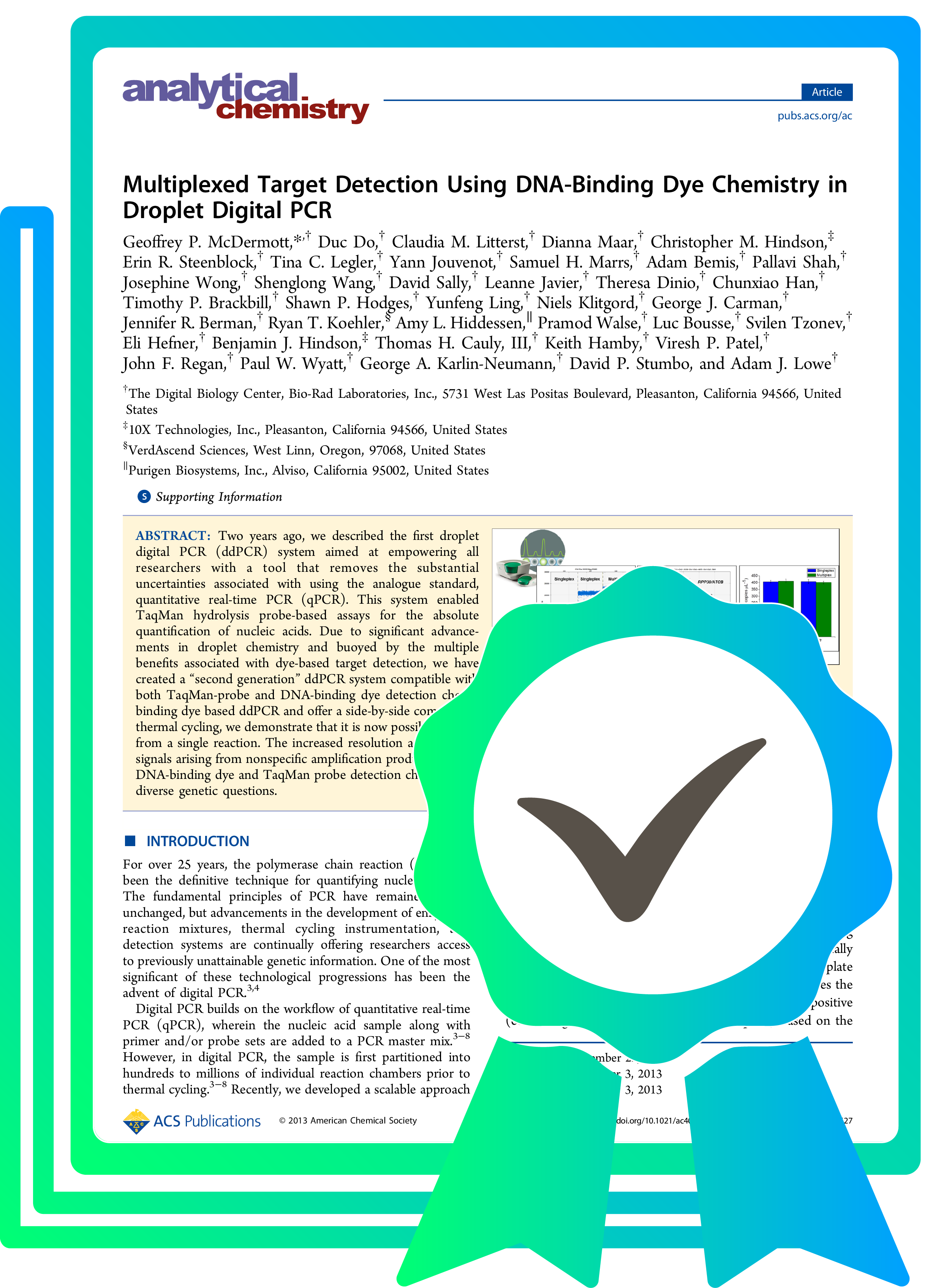 Highlighted Citation: The superior performance demonstrated by EvaGreen® dye has allowed it to be the first and only DNA-binding dye suitable for ddPCR applications. Initially designed for fluorescent probe-based detection, ddPCR technology has enabled quantitative multiplex PCR by partitioning samples into thousands of droplets that can be individually measured. In a publication in Analytical Chemistry, McDermott et al. demonstrate how EvaGreen® dye can be used with ddPCR to analyze multiple targets within a sample by distinguishing the amplified DNA mass per droplet. Results show EvaGreen®-based ddPCR performs comparably with TaqMan®-based ddPCR, without the added complexity and cost of fluorescent probes. EvaGreen® Dye is currently licensed for Bio-Rad’s QX200 ddPCR™ EvaGreen® Supermix and other ddPCR related reagents.

Another major advantage of EvaGreen® Dye over other PCR and HRM dyes is its safety. EvaGreen® Dye is the first and only PCR dye to date designed to be environmentally safe.

Very few PCR dyes have been thoroughly studied for their safety despite the increasing use of PCR in research and diagnostics and the fact that DNA-binding dyes are inherently dangerous due to their potential to cause mutation.

Thus, handling and disposal of PCR master mixes can be a health and environmental issue. Indeed, SYBR® Green I is found to be even more environmentally toxic than ethidium bromide, one of the best known mutagens. SYBR® Green I has been suggested to interfere with DNA repair mechanisms in cells, and as a result it potentiates genotoxicity of chemicals as well as DNA damage by UV light.

Although no safety data are available on other PCR and HRM dyes (e.g., SYTO9, LC Green, BRYT Green and ResoLight), those dyes are all known to enter cells in a matter of minutes, thus posing potential genotoxicity risk. With this in mind, Biotium’s scientists designed EvaGreen® Dye to be cell membrane impermeable by increasing the molecular size and charge of the dye (Figure 4). Because EvaGreen® Dye is denied the chance to interact with genomic DNA in living cells, it is made much safer than the other dyes. Independent laboratory tests have confirmed that EvaGreen® is non-mutagenic, non-cytotoxic and safe to aquatic life. The dye has passed environmental hazardous waste regulation in the state of California (CCR title 22) for easy disposal down the drain. See the EvaGreen® Safety Report for more information.

EvaGreen® Dye is very stable both during storage and under PCR conditions. EvaGreen® Dye has been reported to be stable at temperatures as high as 65°C for up to 6 months of use in the field for real-time PCR (Mil Med. 2014 179(6):626-32).

SYBR® Green I, on the other hand, is known to degrade following multiple freeze-thaw cycles and under PCR conditions. Moreover, decomposed SYBR® Green I is reported to be even more inhibitory to PCR. Thus, when assessing the performance of an EvaGreen®-based master mix, you can eliminate the stability of the dye as a variable.

EvaGreen® Dye is spectrally similar to FAM or SYBR® Green I, which means no change in optical settings is required for using an EvaGreen®-based master mix.

EvaGreen® Dye is currently the only qPCR dye to be used in droplet digital PCR (ddPCR).

*Performing HRM may require a license from Idaho Technology.

EvaGreen® Plus Dye, 20X in Water