How Safe is Your Gel Stain?

A number of ethidium bromide (EtBr) alternatives are marketed as being safe. In fact, many so-called “safe” gel stains contain dyes that are well known to bind DNA in living cells, with cytotoxic effects. GelRed® and GelGreen® are highly sensitive gel stains designed to be nontoxic and nonmutagenic by virtue of being cell membrane impermeable, so they cannot enter living cells. Download our white paper to learn more.

Safer alternatives to EtBr, SYBR® Safe, and others

EtBr has been the predominant dye used for nucleic acid staining for decades because of its low price and generally sufficient sensitivity. However, EtBr is a highly mutagenic material. The safety hazard and costs associated with decontamination and waste disposal can ultimately make the nucleic acid dye expensive to use. The dye experts at Biotium developed the extremely popular GelRed® and GelGreen® fluorescent agarose gel stains to not only be the most sensitive DNA gel stains on the market, but also the safest: they are the only DNA gel stains that have been tested and found to be safe and non-toxic by independent laboratories. To learn more, visit the GelRed® and GelGreen® technology page.

PAGE GelRed® is a version of our popular GelRed® dye that was specially formulated for staining DNA in polyacrylamide gels. Like the classic GelRed®, PAGE GelRed® has also been found to be safe by independent laboratories.

Choose the Right Stain for Your Application

As Biotium continues to innovate in gel staining, we now offer a truly unique visible DNA gel stain called DNAzure®. DNAzure® dye binds to DNA in an agarose gel, and after exposure to light develops visible blue bands. The blue staining is long-lasting and doesn’t require any further light source, making it ideal for cutting out bands (no worry about UV light damaging your DNA sample or your eyes). Even more amazing is that this visible stain is more sensitive than more fluorescent DNA gel stains.

Staining RNA with ethidium bromide (EtBr) requires a significant amount of the dye yet still offers very limited sensitivity for RNA when prestaining or post-staining gels. EMBER500™ was developed by Biotium scientists to offer much brighter signal and higher sensitivity than EtBr for RNA gel staining. For maximum convenience, EMBER500™ RNA Prestain Loading Dye includes formamide as well as electrophoresis tracking dyes, allowing sample denaturing, loading, tracking, and staining in a single step. The prestain is supplied as a 2X concentration, for convenient loading of sample and dye in equal volumes.

Features and benefits of EMBER500™

Thiazole Green (also known as SYBR® Green) is excitable by UV or blue light and may also be used for detection of DNA or RNA in agarose or polyacrylamide gels.

Ethidium bromide (EtBr) is widely used as a UV-excitable DNA gel stain and is a known mutagen.

Gel illuminators have traditionally relied on UV illumination for visualization of fluorescently labeled nucleic acids and proteins. However, UV-based imaging can damage skin and eyes, as well as your DNA samples. LED-based illuminators were developed as a safer alternative to UV, but often have high background and dimmer signal due to excessive ambient light and poor excitation efficiency. 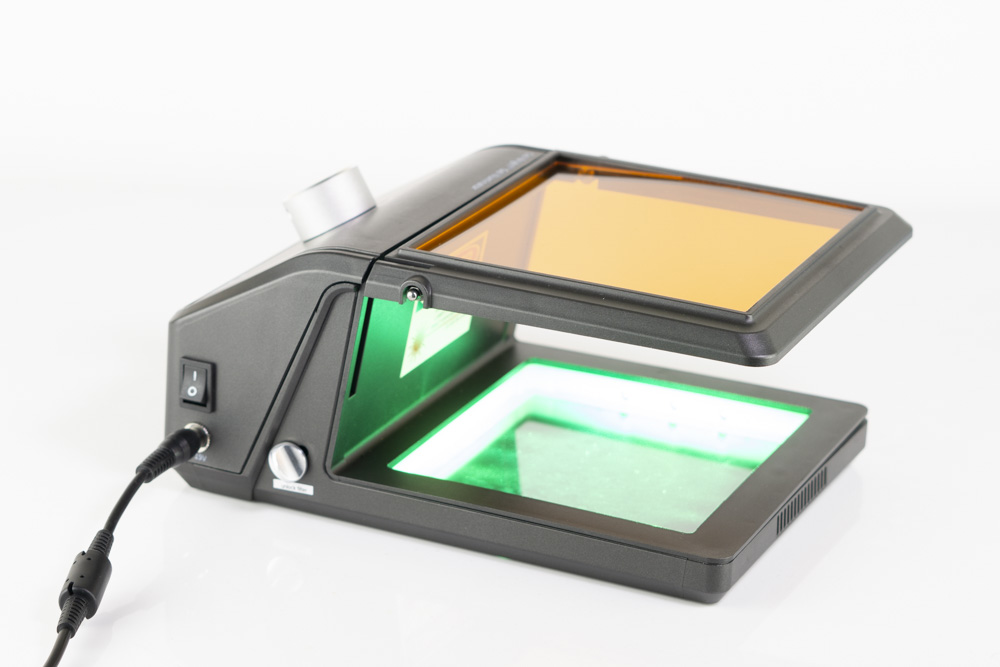 Why am I seeing smeared or smiling DNA band(s) or discrepant DNA migration?
Many customers use GelRed® or GelGreen® precast gels for convenience. However, because GelRed® and GelGreen® are high affinity dyes designed to be larger dyes to improve their safety, they can affect the migration of DNA in precast gels. Some samples, such as restriction digested DNA may migrate abnormally in GelRed® or GelGreen® precast gels. Tip #1: Load less DNA Smearing and smiling in GelRed® or GelGreen® precast gels most often caused by overloading of DNA. If you see band migration shifts or smearing and smiling, try reducing the amount of DNA loaded. The recommended loading amount for ladders and samples of known concentration is 50-200 ng/lane. For samples of unknown concentration, try loading one half or one third of the usual amount of DNA. This usually solves band migration problems. Tip #2: Try the post-staining protocol To avoid any interference the dye may have on DNA migration, we recommend using the post-staining protocol. If your application requires loading more than the recommended amount of DNA, use the post-staining protocol. While we recommend post-staining gels for 30 minutes, you may be able see bands in as little as five minutes, depending on how much DNA is present. Post-staining solutions can be reused. See the GelRed® Product Information Sheet or GelGreen® Product Information Sheet for detailed protocols. Other tips to improve agarose gel resolution:


View more FAQs
Why do I see weak fluorescence, decreased dye performance over time, or a film of dye remaining on the gel after post-staining?
There are a few possibilities:

My product was accidentally left out at room temperature or exposed to light. Is it ruined?
Most of our products are stable at room temperature for many days, so in all likelihood the product will still work just fine. To be on the safe side, we recommend performing a small scale positive control experiment to confirm that the product still works for your application before processing a large number of samples or precious samples. One exception that we are aware of is GelGreen™, which is more sensitive to light exposure than most of our other fluorescent dyes. If GelGreen™ is exposed to ambient light for a prolonged period of time (days to weeks), its color will change from dark orange to brick red. If this occurs, the GelGreen will no longer work for gel staining.


View more FAQs
Why do you offer GelRed® and GelGreen® in DMSO or water?
The water formulation is a newer and improved product compared to the stock in DMSO. We recommend using dyes in water to avoid the potential hazards of handling DMSO, which can be absorbed through the skin. We continue to offer dyes in DMSO because some users do not wish to alter their established laboratory protocols. Based on internal testing, both formulations perform similarly.


View more FAQs
Once the DNAzure® solution is diluted to 1X, how long can it be stored?
For optimal staining, we recommend diluting the 100X DNAzure® stock to 1X working solution fresh each time. However, if a 1X solution stored at 4°C and protected from light, the gel stain should to be good up to two weeks.