Ultra-sensitive DNA Stains
Much more sensitive than EtBr and SYBR® Safe.
Safer than EtBr
Shown by Ames test and other tests to be non-mutagenic and non-cytotoxic.
Easy disposal
Passed environmental safety tests for disposal down the drain or in regular trash.
Application Flexibility
Use in either precast or post electrophoresis staining.
Compatible with cloning and sequencing.
Extremely stable
GelRed® & GelGreen® DNA stains are stable at room temperature for long-term storage.
Broad instrument compatibility
Use UV and EtBr settings for GelRed®.
Use UV or blue LED for GelGreen® with SYBR® settings.

Choose the Right Stain for Your Application

How Safe is Your Gel Stain?

A number of ethidium bromide (EtBr) alternatives are marketed as being safe. In fact, many so-called “safe” gel stains contain dyes that are well known to bind DNA in living cells, with cytotoxic effects. GelRed® and GelGreen® are highly sensitive gel stains designed to be non-toxic and non-mutagenic by virtue of being cell membrane-impermeant, so they cannot enter living cells. Download our white paper to learn more.

Safer alternatives to EtBr, SYBR® Safe, and others

EtBr has been the predominant dye used for nucleic acid staining for decades because of its low price and generally sufficient sensitivity. However, EtBr is a highly mutagenic material. The safety hazard and costs associated with decontamination and waste disposal can ultimately make the nucleic acid dye expensive to use. For this reason, various ethidium bromide alternative DNA gel stains have become commercially available in recent years. Although these alternative nucleic acid staining dyes are marketed as having low mutagenicity, they often have to sacrifice other aspects of the dyes. For example, SYBR® Safe has very limited sensitivity while SYBR® Green and SYBR® Gold are much less stable than EtBr. In addition, many so-called “safe” DNA dyes like Midori Green, GreenSafe, SafeView™, and RedSafe™ not only have low sensitivity, but also readily penetrate living cells to bind DNA, and some are cytotoxic. See our Gel Stains Comparison for details.

Non-toxic, non-mutagenic, and non-hazardous for disposal

GelRed® and GelGreen® are highly sensitive either as precast gel stains or post gel stains. GelRed® is much more sensitive than EtBr, and unlike SYBR® Gold, GelRed® can also be used as a highly sensitive precast gel stain. GelRed® is also available as a convenient prestain loading buffer. GelGreen® is spectrally similar to SYBR® Safe but is far more sensitive, and can be used with blue light gel imaging systems like the DarkReader®. PAGE GelRed® is designed for staining DNA in acrylamide gels. Another major advantage of GelRed® and GelGreen® DNA stain is their remarkable stability. You can store and handle the two nucleic acid staining dyes the same way you do with EtBr. For convenience, GelRed® and GelGreen® are also available in pre-coated agarose formats. For detailed protocols for use of the DNA stains, please download the GelRed® Product Information Sheet or GelGreen® Product Information Sheet.

GelRed® Is Superior to EtBr 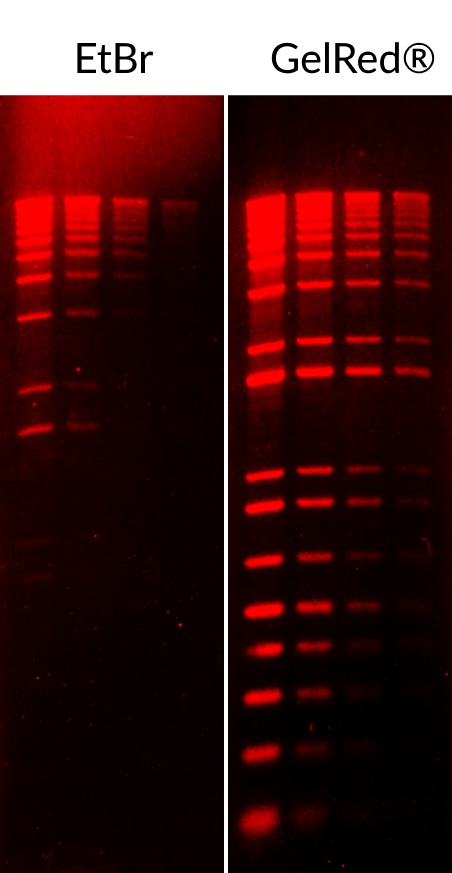 GelGreen® Is Unmatched by SYBR® Safe 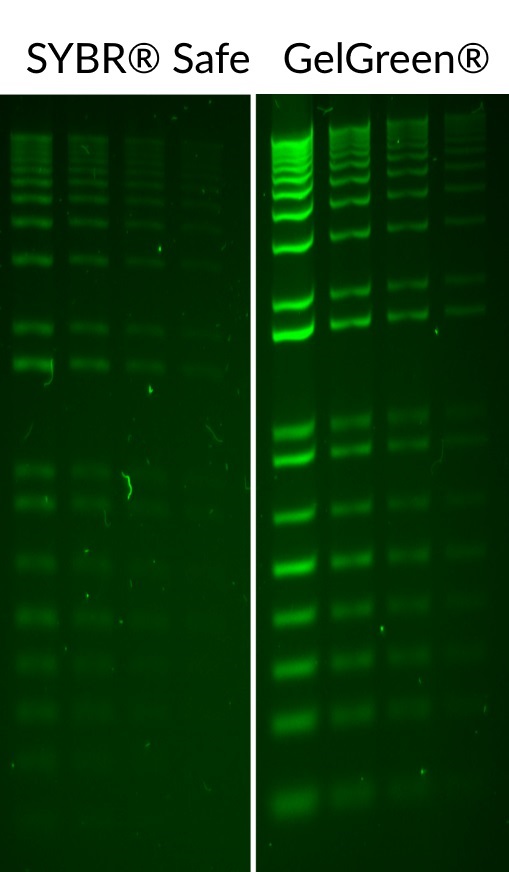 Click here to download an App Note on using GelRed® and GelGreen® on the UVP GelDoc-It® imaging system.

Click here to download an App Note on using GelGreen® on the UVP GelDoc-It® imaging system with the Visi-Blue™ Converter Plate.

Why am I seeing smeared or smiling DNA band(s) or discrepant DNA migration?
Many customers use GelRed® or GelGreen® precast gels for convenience. However, because GelRed® and GelGreen® are high affinity dyes designed to be larger dyes to improve their safety, they can affect the migration of DNA in precast gels. Some samples, such as restriction digested DNA may migrate abnormally in GelRed® or GelGreen® precast gels. Tip #1: Load less DNA Smearing and smiling in GelRed® or GelGreen® precast gels most often caused by overloading of DNA. If you see band migration shifts or smearing and smiling, try reducing the amount of DNA loaded. The recommended loading amount for ladders and samples of known concentration is 50-200 ng/lane. For samples of unknown concentration, try loading one half or one third of the usual amount of DNA. This usually solves band migration problems. Tip #2: Try the post-staining protocol To avoid any interference the dye may have on DNA migration, we recommend using the post-staining protocol. If your application requires loading more than the recommended amount of DNA, use the post-staining protocol. While we recommend post-staining gels for 30 minutes, you may be able see bands in as little as five minutes, depending on how much DNA is present. Post-staining solutions can be reused. See the GelRed® Product Information Sheet or GelGreen® Product Information Sheet for detailed protocols. Other tips to improve agarose gel resolution:


View more FAQs
Why do I see weak fluorescence, decreased dye performance over time, or a film of dye remaining on the gel after post-staining?
There are a few possibilities:


View more FAQs
Why do you offer GelRed® and GelGreen® in DMSO or water?
The water formulation is a newer and improved product compared to the stock in DMSO. We recommend using dyes in water to avoid the potential hazards of handling DMSO, which can be absorbed through the skin. We continue to offer dyes in DMSO because some users do not wish to alter their established laboratory protocols. Based on internal testing, both formulations perform similarly.


View more FAQs
How do I use GelRed® and GelGreen®?
GelRed® and GelGreen® can be added to agarose during gel casting at a final concentration of 1X, or they can be used for post-electrophoresis gel staining at a final concentration of 3X in water. For detailed protocols for use, please download the GelRed® Product Information Sheet or GelGreen® Product Information Sheet.