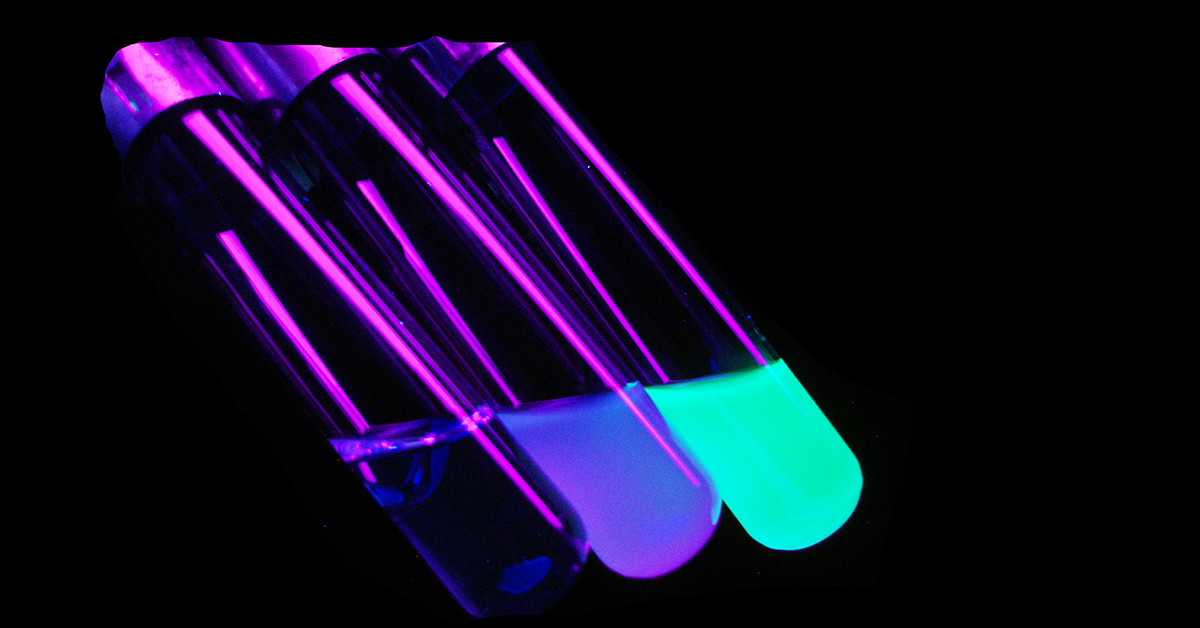 Below is a brief overview of these techniques and how they are applied in life sciences research.

Bioluminescence refers to the powerful ability to see what is going on inside of organisms through the emission of visible light.1 The technique enables researchers to study biological processes in real-time, in vivo. It has been developed over the past few decades and used primarily in small animals for the purposes of molecular imaging.

Bioluminescence works by detecting visible light that is produced when an enzyme oxidizes a molecular substrate. Most often, the enzyme, which is referred to as a bioluminescent reporter, is firefly luciferase.2 However, luciferases cloned from other species have also been deemed useful. These luciferases come from organisms including jellyfish, coral, beetle, and bacteria.3 Renilla luciferase reporter gene is another commonly used enzyme in bioluminescence.4

Given that mammalian tissue has no intrinsic bioluminescence, images generated with bioluminescence have a high signal-to-noise ratio, and the technique can be used to visualize activity within internal organs.1 Though the specific sensitivity of bioluminescence imaging depends on several factors, such as the depths of the labeled cells, the sensitivity of the detection system, and the level of luciferase expression, advances in the detector technology have improved sensitivity and resulting quality of images.5

There are a wide range of research applications for bioluminescence, including monitoring basic activity like protein interactions and intracellular motility, as well as monitoring more clinically-relevant processes like infection progression, tumor growth and metastasis, transgene expression, and the impact of gene therapy.1,6–8  One of the most prominent reporter gene assays used in pharmaceutical development – the luminescent reporter gene assay – employs bioluminescence because this technique is conducive to relevant high-throughput screening processes.9

With chemiluminescence, light is detected due to a reaction of a substrate with a reactive oxygen species. Chemiluminescence often leverages the process by which horse radish peroxidase catalyzes the oxidation of luminol or oxalate esters by hydrogen peroxide, though other substrates are also employed.10

Advantages of chemiluminescence can be realized using both in vitro and in vivo applications.11,12 For instance, the technique can help in the detection of several analytes, including proteins enzymes nucleic acid and even cells.13,14 It can also enable real-time monitoring of physiology and pathology and is therefore useful for investigating aspects of drug delivery and tumor growth.15

Photoluminescence requires that a molecule absorb light radiation and for its electrons to become excited. When this occurs, molecules transform from the ground state to an excited state. Because the excited state is unstable, the molecule inevitably reverts back to its ground state, dissipating energy.

Fluorescence occurs due to differences in exciting and emitting wavelengths.17 After a photon of light energy is absorbed, it loses some energy and emits another photon nanoseconds later in what is referred to as the Stokes shift. The emitted photon carries less energy, and its light is therefore of a longer wavelength than the wavelength of the absorbed light.

Fluorescent objects are visible when the excited light is blocked out but the emitted light is not. This approach to luminescence provides superior contrast when compared with absorption approaches that involve staining with agents that absorb light, such as Gram stains. 18 Because fluorescent dyes often absorb light that is only slightly distinct from the background, the contrast they produce can be limited.17

Fluorescence is used in conventional lab techniques. For instance, western blot (or immunoblot) employs this technique to help quantify proteins. Flow cytometry also uses fluorophores – which can absorb and emit light within a range of wavelengths – in combination with antibodies to detect biological markers.

There is poor signal-to-noise when fluorescence is used within thicker tissue samples because the excitation light has to penetrate several other biological layers which leads to autofluorescence. Some efforts to improve contrast between the background and entity of interest has led to fluorescence microscopy, which is now an integral piece of the microscopy used in biology research.19

The use of phosphorescence has broadened in recent decades because of some specific advantages afforded by this technique including high sensitivity, selectivity, and time resolved detection. In addition, while phosphorescence techniques were once restricted to solid phases or low temperatures, new approaches have recently evolved that allow for liquid state and room temperature phosphorescence.

Luminescence is an important tool in life sciences research, particularly for visualizing molecules and biological processes. The best luminescence approach depends on the specific goals of the research. Navigating some of these tools’ applications can help elucidate their relative advantages and disadvantages.

Dr. Nisha Cooch earned her PhD in Neuroscience from the University of Maryland School of Medicine. Dr. Cooch  has conducted research at the National Institutes of Health (NIH) and served as an American Association for the Advancement of Science (AAAS) Science and Technology Policy Fellow. She is published in popular media outlets as well as peer-reviewed journals such as Nature Neuroscience.