A multi-functional blue LED light box that can be used for photolysis of PMAxx™ or PMA in viability PCR. It is also an excellent way to develop the staining of gels stained with the visible blue DNA gel stain DNAzure®.

PMA and PMAxx™ for viability PCR

What’s the difference between EMA, PMA, and PMAxx™?

Learn more about PMA and PMAxx™ for viability PCR.


View more FAQs
Should I prepare the PMA stock in DMSO or water?

Both PMA and PMAxx™ are both offered as 20 mM solutions in water. We also offer PMA as a solid, and customers often ask whether it needs to be dissolved in DMSO. While in some publications users have prepared their PMA stock solution in DMSO, this is not necessary. Unlike the older viability dye EMA, which is not soluble in water, PMA and PMAxx™ are very water soluble.


View more FAQs
I’ve been using PMA for viability PCR. Should I switch to PMAxx™?

We have compared PMA and PMAxx™ for their ability to differentiate between live and dead cells in viability PCR assays, and in all bacteria strains tested*, PMAxx™ had better activity. Therefore, while we haven’t tested every bacterial strain, we recommend PMAxx™ for bacterial viability PCR.

A recent publication by Randazzo et al. compared several viability PCR dyes in norovirus, and found that PMAxx™ worked the best for that organism.

We have also compared PMA and PMAxx™ in viability PCR assays with the yeast Saccharomyces cerevisiae, and found that PMA was equal to or better than PMAxx™. Therefore we recommend PMA for yeast and fungus viability PCR.

What light sources can be used to develop DNAzure® bands?

We have tested a variety of different light sources for the development of DNAzure® bands in an agarose gel. We have found that most light sources will work, but how long the development takes is dependent on the brightness of the light. The fastest band development is seen with our Gel-Bright™ and Glo-Plate™ Blue LED illuminators. We have also seen good results with other bright, white LED lights. Other light sources that work but take more time include an LED desk lamp and a cell phone light. We found that a 600W halogen lamp did not work well- it was too hot, which melted the gel.


View more FAQs
Once the DNAzure® solution is diluted to 1X, how long can it be stored?

For optimal staining, we recommend diluting the 100X DNAzure® stock to 1X working solution fresh each time. However, if a 1X solution stored at 4°C and protected from light, the gel stain should to be good up to two weeks.

Share this product with a colleague or purchasing manager.

Tax is assessed in the state of California. All fees will be calculated during checkout based on your shipping information and are subject to change.

The Glo-Plate™ Blue LED Illuminator is a light-weight, multi-functional LED light box. The LEDs in the Glo-Plate™ Blue were designed for optimal photolysis of PMAxx™– or PMA-treated samples in viability PCR applications.

The Glo-Plate™ Blue device is designed for flexibility and high-throughput assays. The base of the Glo-Plate™ Blue chamber contains blue LED lights topped with a diffuser, allowing for even illumination across entire multi-well plates. If you need a device designed for use with microcentrifuge tubes, see our PMA-Lite™ LED Photolysis Device. 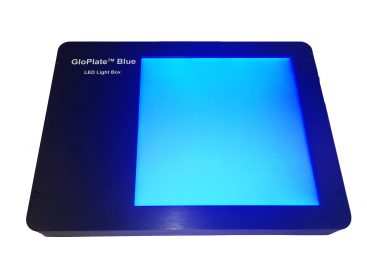 Viability PCR is a powerful technology for the sensitive and rapid detection of viable microorganisms. Unlike time-consuming culturing methods, qPCR is a fast and sensitive method of detection. However, normal qPCR does not distinguish between live and dead cells. With v-PCR using PMAxx™ or PMA, you get the speed, sensitivity and specificity of PCR, plus quantifiable viability. And because no culturing is required, you can even detect viable but not culturable (VBNC) bacteria. The v-PCR technology can be applied not only to bacteria but to other organisms like yeast, viruses, eukaryotes, and archaea.

PMAxx technology is covered by granted and/or pending US and international patents.

The Glo-Plate™ Blue LED Illuminator  is also an excellent light source for developing the staining of gels stained with the visible blue DNA gel stain DNAzure®. DNAzure® is a novel, visible blue DNA gel stain with extremely high sensitivity. After staining with DNAzure® the DNA bands first appear colorless, but then become dark blue after developing with light exposure. The benefit to using DNAzure® instead of fluorescent DNA dyes is that once the stain has developed, the DNA can be visualized by eye, without the need for imaging equipment. This is particularly advantageous for processes such as gel excision.

A kit designed to perform viability PCR on Listeria monocytogenes. It contains a viability dye (PMAxx™ or PMA) and primers to amplify the hly gene.
Detailed View

A blue nucleic acid gel stain to visualize dsDNA in agarose or polyacrylamide gels by the unaided eye.
Detailed View