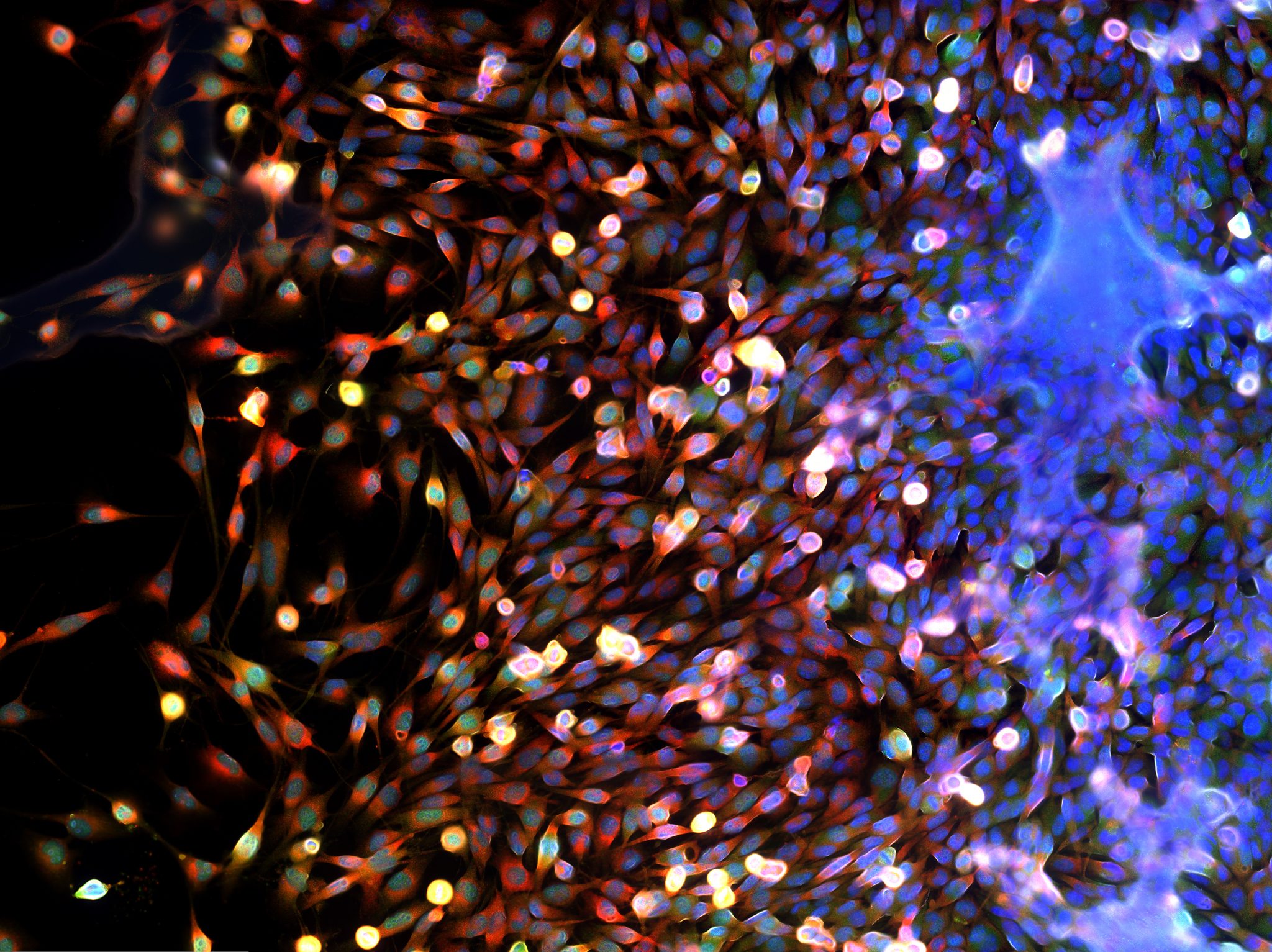 Photoconversion of DAPI and Hoechst

Usually the first step of fluorescence imaging of cells is to focus on DAPI- or Hoechst-stained nuclei through the microscope before switching to other channels to view your staining. This can lead to an unpleasant surprise when blue-stained nuclei suddenly start fluorescing in the green and red channels. You may not know that UV excitation from your microscope’s mercury arc lamp induces protonation of DAPI and Hoechst, causing them to emit green and red fluorescence (Żurek-Biesiada et al. 2013, Karg and Golic 2017). While the fluorescence from photoconversion of DAPI or Hoechst is much less bright than their blue nuclear staining, it can increase background in other channels. Even worse, it could appear as artifactual nuclear localization of your target of interest.

Once you’re aware of the potential for photoconversion of DAPI or Hoechst, you can avoid it through careful imaging practices. The dyes photoconvert after exposure to UV excitation, but not 405 nm confocal excitation. So you can focus on DAPI using UV excitation, then move to an unexposed field of view before imaging by confocal. If you’re imaging epifluorescence using mercury lamp excitation, you can image the DAPI channel last to avoid photoconversion.

Biotium’s RedDot™ far-red nuclear stains avoid the problem of UV photoconversion of DAPI and Hoechst altogether. RedDot™ stains are nuclear-specific stains for the Cy®5 channel. RedDot™1 is cell-membrane permeable, and can be used as a nuclear stain for live cells, while RedDot™2 is a counterstain for fixed and permeabilized cells. RedDot™2 also can be used for selective staining of dead cells. A disadvantage of RedDot™1 is that it is more cytotoxic than the commonly used Hoechst 33342, which remains the better choice for nuclear staining of cells that will be cultured for more than a few hours. Also, like all far-red dyes, RedDot™1 and RedDot™2 fluorescence is not visible to the human eye, so they are not useful for focusing on cells through the microscope. But on the plus side, RedDot™ fluorescence is very well separated from green fluorescent dyes and probes, for minimal cross-talk. In addition, they leave the visible blue fluorescence channel free for detection of other targets. Biotium also offers NucSpot® Live 488, a non-toxic green nuclear stain for live cells, and NucSpot® 470, a highly specific green nuclear counterstain for fixed cells and tissue sections. Because these dyes are excited at longer wavelengths than DAPI or Hoechst, they do not undergo UV photoconversion.

Watch out for other sources of cross-talk

Photoconversion is just one potential source of dye cross-talk between different channels. Cross-talk often occurs between dyes with close emission wavelengths, but even well-separated dyes can bleed into other channels if the signal is excessively bright. A successful multi-color experiment requires both careful selection of dyes for your instrument and titration of your probes to prevent overly bright signal. A spectra viewer can be helpful to see how dyes overlap.

Every multi-color staining experiment should include single-stain controls with each probe by itself to make sure there’s no cross-talk. Image your single-stain controls using the same laser/gain settings or exposure time as the multiple stain samples. Depending on your instrument configuration, cross-talk might be best controlled by imaging two channels simultaneously or separately, or imaging with only one excitation laser at a time.  By making sure that cross-talk in your single stain controls is undetectable, you can have confidence in the quality of your multicolor images.

Lori Roberts holds a PhD in Biomedical Science from the University of California, San Francisco. She currently serves as the Director of Bioscience at Biotium.